Use this methodology and software to generate and investigate all the assumptions that must be true for project success.

Minesweeper project de-risking is a team-based approach to minimize unnecessary project risk. The methodology was developed by The AIM Institute, and its practitioners use Minesweeper® software to implement it (accessible at www.aimclientcenter.com or www.blueprintingcenter.com).

Minesweeper methodology doesn’t ensure your project will be successful. Rather it allows your team to detect and investigate potential “landmines” (untested assumptions) at the earliest possible point in time. In some cases your team will find ways to defuse these landmines and indeed find success. But in other cases, you may find a landmine that cannot be defused: In these cases, your team will learn this quickly, halt the project, and avoid squandered time and money.

This methodology can be used for any project where untested assumptions represent a threat to success… but it was designed for market-facing innovation. A prime example would be your R&D staff developing a new product for a target market.

Many companies use the Ansoff matrix below to gauge the risk they will face. As they pursue unfamiliar technologies and especially unfamiliar markets, they experience much lower probabilities of success. While Minesweeper project de-risking is a natural fit for these unfamiliar regions, a number of companies have found it useful even for “core” projects in the lower-left of the matrix. 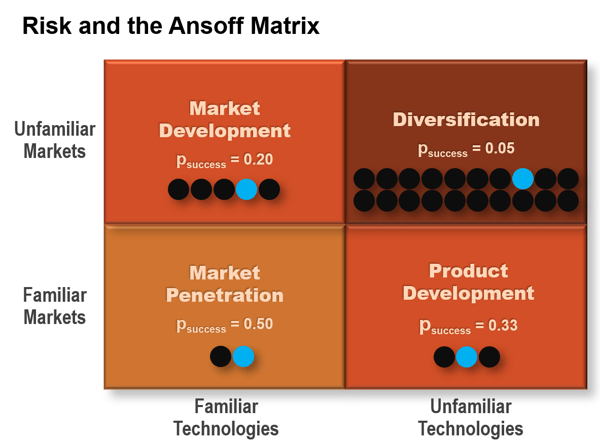 Minesweeper project de-risking focuses on assumptions that must be true for your project to succeed. Each of these assumptions needs to be understood in terms of impact and certainty. If an assumption is high impact—for instance, “We must meet federal regulations with our product”—the team had better verify this sooner rather than later.

For these high-impact assumptions, the team seeks to move from uncertainty to certainty. At the beginning of the project, the team will be uncertain of many of these assumptions. But they will catalog all of them and team members will each take individual responsibility to investigate their assigned assumptions. The team also needs to stay open-minded and seek to add new assumptions to their list.

Think of it this way: At the onset of the project the team can identify Facts (high certainty), Assumptions (moderate certainty) and Questions (low certainty). These represent what the team is aware of. But another category must be added: Surprises. These are new assumptions that the team didn’t originally imagine, but added as the project proceeded.

These four categories are shown in the FAQS map below, and represent four different levels on the certainty-to-uncertainty spectrum. Instead of these labels, your project team will assign 1-to-5 levels of certainty. But this illustration makes an important point: Your team will be aware of some assumptions as you begin your project… but then must discover others as you proceed. 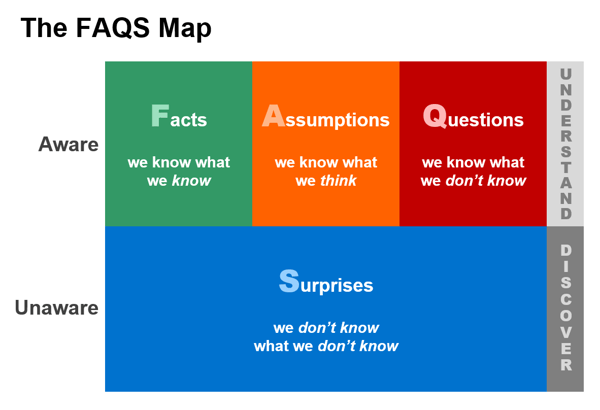