Your CheckPoint plan is an action plan for driving key project assumptions from uncertainty to certainty.

The CheckPoint plan is usually built at the end of the same one-to-two day team meeting in which your project assumptions were generated and rated for impact and certainty. But it could be created at a separate, subsequent meeting.

After the CheckPoint plan is created, your team will review the results of these investigative CheckPoint tasks at regularly scheduled “checkpoints” or team meetings. It’s important for your team to commit to a regular cadence of CheckPoint meetings, e.g. every two weeks.

When your team has a CheckPoint meeting, team members report what they learned as they completed their investigative tasks… such as running a lab experiment, meeting with an industry expert or interviewing a customer. There are three possible outcomes of these task, each of which is reported on a Certainty Matrix. 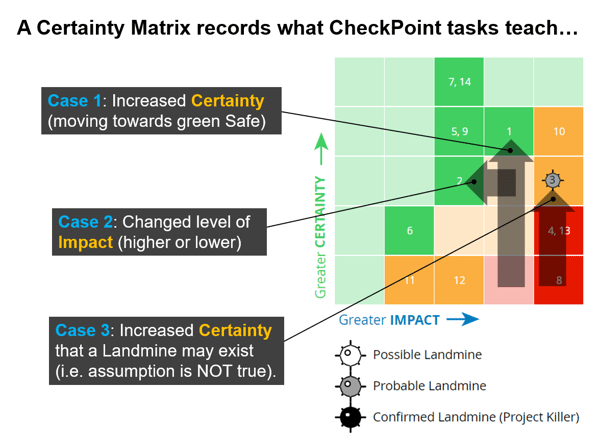 In all cases, the team should update its “Source of Truth” and “Findings” on the assumption rating page as it learns more.