1. Rules of engagement for team ratings

Your team reviews individuals' ratings and then agrees upon team ratings. Be sure to follow these guidelines!

Once your team members—and any other colleagues you invited—have completed their online ratings, it’s time for your team to rate each assumption for impact and certainty. You’ll move to Minesweeper Step 4: Team Ratings, where you’ll see one page for each assumption. (See illustration below.)

The assumption appears at the top (red arrow): You’ll notice that the assumption now has a number associated with it, in this case MD1 (for the first Market Dynamic assumption.). If you want to view all assumptions or add more assumptions click the link to the right (orange arrow).

You’ll see histograms that tally the number of impact and certainty ratings (blue and green boxes below, respectively). In this example, 4 team members rated impact as “Important,” 1 rated it “Crucial” and 1 rated it “Essential.” 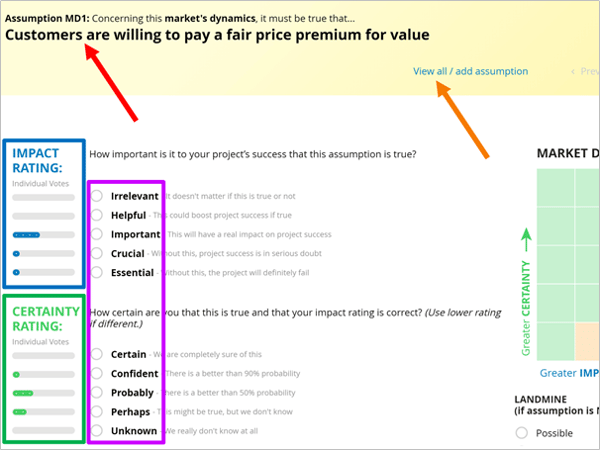 Your team will debate the merits of each rating and finally enter an agreed-upon rating to the right (purple box). Caution: Do not simply “average” the votes that individuals have registered. Some individuals have more subject matter knowledge, so their opinions will be more highly regarded. Also you want to ensure over-optimism doesn’t creep in, so we have some “rules of engagement” your team should follow. 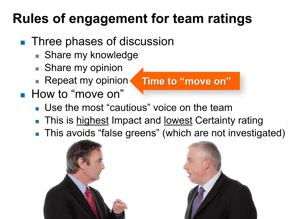 As you listen to your team debate the proper impact or certainty rating, you’ll notice that there are three phases of discussion. First, I share my knowledge: This is very helpful. Second, I share my opinion: This is also a good thing. Third, I start repeating my opinion: Hmmm… not so helpful anymore. It’s time to move on.

How do you resolve differences of opinion at this point? You use the rating of the most “cautious” voice on your team. This is the highest impact rating and lowest certainty rating. 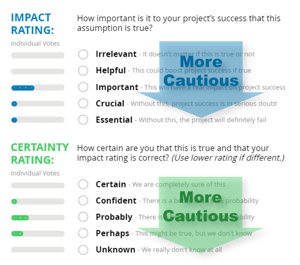 But don’t do this until after everyone has shared their knowledge and opinions (once). It’s very common for team members to change their original views after they hear the perspective of other team-mates. In some cases, another team member simply has more knowledge or experience in this area. In other cases, a team member looks at the issue from a valuable vantage point others had missed.

It may help to note that the “most cautious” rating is always displayed towards the bottom of the radio buttons… for both impact and certainty.

When your team selects an impact rating, you’ll see the Certainty Matrix to the right has the corresponding column highlighted. And when the team certainty rating is selected, the highlighted area narrows to both the proper column and row.

So if impact was rated as “Crucial” and certainty as “Perhaps,” this assumption (MD1) would be placed near the lower-right corner of the matrix. Notice there are three colors in the matrix:

After all assumptions are rated, your team will focus on these red and yellow assumptions… but not the green ones. So you can see why we ensure the most cautious voice “wins.” If a team prodded members to accept a higher certainty or lower impact than was appropriate, it might place an assumption in the green zone and no longer investigate it. It’s much better to err on the side of caution: You can always move an assumption into the green zone later after it’s been properly investigated. 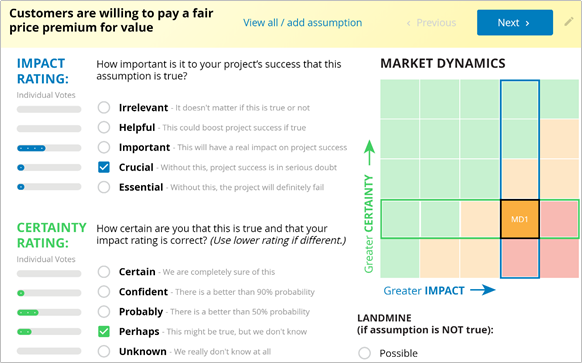 One last thought: These are just the initial placements of assumptions. After your team creates a CheckPoint plan, it will investigate each assumption. Sometimes the assumption will move to the left or right… as the impact is found to be different than originally thought. But in most cases, your assumptions will move “north”… from red to yellow and hopefully green at some point.