What if your team approaches "certainty"... but on bad news, not good? Use possible, probable & confirmed landmines for this.

Imagine your team has generated the assumption, “Government regulations won’t block or significantly delay us.” The team rates impact as “Essential” and Certainty as “Unknown.” As shown in the illustration below. This places the assumption in the lower right in the red “Danger” zone. Now imagine two paths forward:

We handle Path 2 by classifying assumptions as “landmines”… something that will halt a project. Here’s how it would work in this example. After the first interview with an industry expert, the assumption might move up in the matrix to “Perhaps” as certainty increases. But the team is gaining certainty that the assumption is NOT true… so it registers this as a “Possible” landmine. (See red box below.)

When another industry expert is interviewed, the assumption might move further up in the matrix… and the team might record this as a “Probable” landmine. Once the team is certain that industry regulations will indeed block this project, the assumption is recorded as a “Confirmed” landmine. 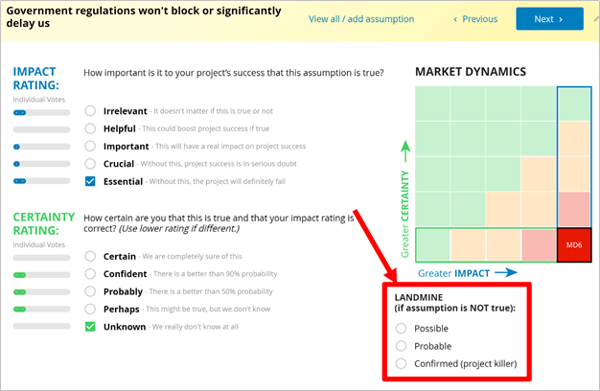 Later, when the team looks at its “Certainty Matrices,” any such landmines will be identified. As shown in this illustration (in the far-right column), Possible, Probably and Confirmed landmines are shown in white, grey and black.

Identifying landmines in this way serves two purposes. First, your team should put extra energy into resolving potential landmines. It would be a waste of resources to investigate lots of other assumptions when a possible landmine could sink your project. So focus first on these.

Second, these landmines are a critical part of your communication to management. Too many teams withhold bad news from management review after review… and then surprise them with a project-killing announcement. Bad idea. Much better to let them know the possible and probably landmines you’re tracking, so no one is surprised.