3. Sources of Truth and Findings

As your team rates an assumption's impact and certainty, be sure to record your source of truth and specific findings.

In addition to Possible, Probable and Confirmed Landmines, there’s another important part of the page where your team enters its impact and certainty ratings. This is the “Sources of Truth” and “Findings” area at the bottom.

When your team makes its initial impact and certainty ratings, you’ll likely have some healthy debate. At some point, you’ll reach agreement based on some of the arguments that were made. Sadly, you’ll probably forget these valid points later.

That’s why you should enter your “Source of Truth” and “Findings” whenever your team makes a rating decision. In the illustration below, the team was rating the assumption, “Total addressable market is at least $100 Mil/yr.) They felt the impact was “Important” but had some debate as to the proper Certainty rating.

Then someone the team cited some research they had read that estimated the market size at approximately $150 Million/yr. This is the perfect time to ask for the name of the research and record its results. As shown below, these are recorded as “Source of Truth” (blue arrow) and “Findings” red arrow. 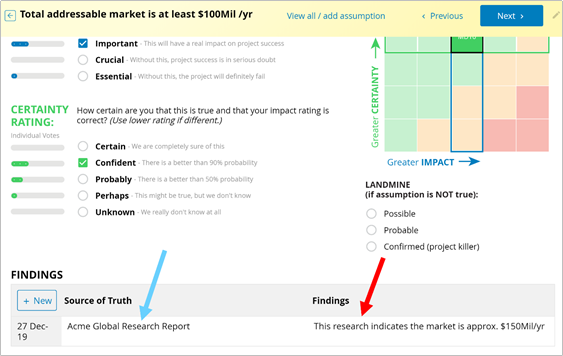 It’s important to continue filling in these fields as your team members investigate assumptions and learn more. You’ll notice in the CheckPoint Plan that its very easy to navigate back to these fields and make your updates.

Practicing some diligence with Source of Truth and Findings is helpful in two ways. First, you’re likely to be questioned—or even challenged—in review meetings for why your team made certain ratings. Unless you have an uncommonly good memory, you’re quite likely to be stumped.

Second, many projects are likely to fail or take unusual turns: It’s only natural. But wouldn’t it be helpful if the company could look back over projects to better understand why they failed? Without recording these Sources of Truth and Findings, it won’t be at all obvious why ratings—and the ensuing decisions—were made at the time.