5. Where Blueprinting fits with Minesweeper de-risking

After teams generate assumptions, a Blueprinting interview is one way to move from uncertainty to certainty on some.

We developed Minesweeper software and methods because Blueprinting wasn’t completely “up to the task” for unfamiliar markets. Turns out Blueprinting is great for finding out what a market would like to get. But it can miss what an unfamiliar market is already getting… and needs to keep getting.

When you pursue an unfamiliar market, you’ll compete against suppliers who have built up many competencies over the years: strong relationships, channels-to-market, responsive technical support, warranty history, production flexibility, returned-goods systems, high product uniformity, etc. These competencies may be so expected and taken for granted that existing customers don’t even mention them during Blueprinting interviews with a challenging supplier.

So we recommend using Minesweeper at the beginning of your project. Teams typically begin with a one-or-two-day workshop to generate all the possible assumptions they can. After the workshop, most teams then use Blueprinting to drive from uncertainty to certainty on key assumptions… especially those involving commercial assumptions. 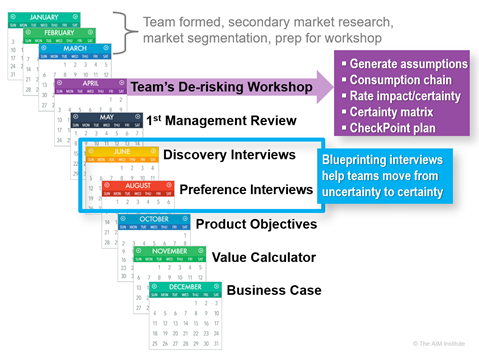 You’ll make some small adjustments to your Blueprinting interviews: For instance, during Discovery interviews, you’ll keep a side list of questions, to help increase certainty on key assumptions. When the customer brings up an outcome that relates to one of your assumptions, you’ll then “increase your certainty” by asking good probing questions. Also, you’ll work especially hard to uncover “Must-Haves.”

The combination of Minesweeper and Blueprinting works remarkably well, even if you are a complete “outsider” to this market. Incumbent suppliers often become complacent, assuming they fully understand their customers’ needs. A challenger using New Product Blueprinting methods can actually understand what B2B customers would like to get better than incumbents.