Here's what the Moderator, Note-taker and (optional) Observer do in an interview. 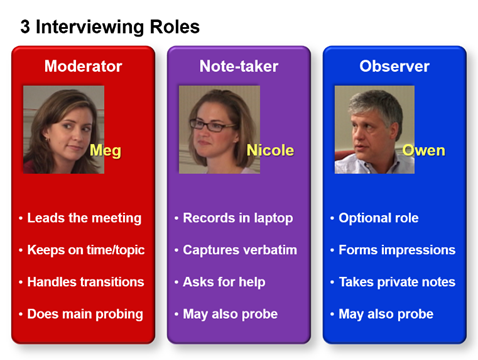 Moderator: This person takes the lead in the overall interview, keeping the meeting on time and on topic. They handle the transitions, so it’s normally the Moderator who decides when to move from Current State to Problems, from Problems to Ideal State, and so on. Also, anyone on the team can probe on a single outcome’s sticky note… but it’s the Moderator who moves to the next note with, “Thanks… what other problems do you see?”

Note-taker: This team member plugs his/her laptop into a digital projector or LCD screen so the customers can see their notes as they’re being recorded. The note-taker tries to capture as many of the customers’ comments verbatim. By this, we don’t mean they capture every… single… word. Rather, they try to capture as many of the actual words as possible (not summarized or paraphrased). The Note-taker can also ask questions… but is often too busy to do much of this.

Observer: This is an optional role… and most beginning teams are grateful for this help. As your Moderator and Note-taker get more experienced working together, they can often handle interviews by themselves. This person has a bit more time, and can form overall impressions of the meeting. They should ask lots of questions, taking pressure off the Moderator. In fact, it might be better to think of this role as a “second Moderator” instead of a passive “Observer.” They should take some private hand-written notes… and then in the post-interview debriefing session, suggest additional notes for the Note-taker to record.

While anybody can technically do any role, it's beneficial for product managers and marketing folks to develop the ability to be a moderator. For more, see e-Learning Module 13: Interview logistics at www.blueprintingcenter.com > e-Learning. 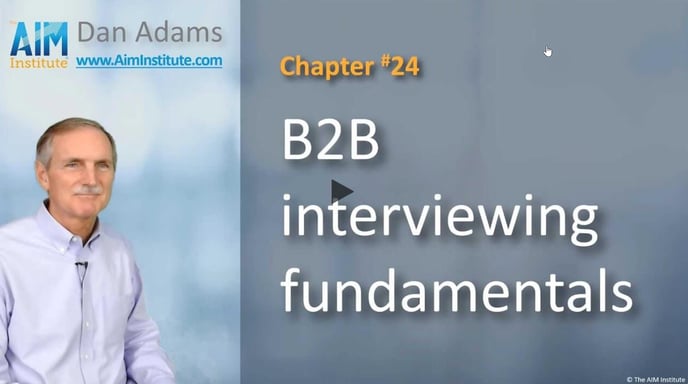