JTBD grew from an evolution of customer-centric frameworks over decades. Clayton Christensen and Anthony Ulwick are most responsible for its modern form.

Like any advanced concept, many people contributed to the formation of JTBD. However, the modern form is the result of two innovators: Clayton Christensen and Tony Ulwick.

Christensen, who’s The Innovator’s Dilemma first warned the world about the traps involved by continually moving up market, made a breakthrough in the early 2000’s when working on a consulting project with McDonald’s.

McDonald’s sought to sell more milkshakes. They began with the normal promotional activities. Discounting, bundling, even experiments with flavors. However, sales remained flat. Christensen’s team studied the milkshake consumption data. They noted that a decent portion was sold in the morning, to a solo driver, with a long and boring commute. Further, these solo shoppers did not buy anything else, just the milkshake.

Christensen’s team interviewed a sample of these customers. They essentially asked them, “For what job are you hiring this milkshake? And for what other foods do you hire for the same job?”

One option was a bagel. But that wasn’t so good because it was hard to spread cream cheese while driving. And the crumbs were everywhere. Next, there was a Snickers bar, but they felt really guilty afterwards. Another was a banana, but it was gone so quickly. Then there was a donut, but who can eat just one?

But these customers noted that you could hold the milkshake in one hand. Also, it took a long time to eat, easing the commute's boredom. And it would keep you full for several hours.

Finally, the McDonald’s team was seeing the market accurately, not as the “milkshake market,” but through their customers’ lenses. And from there they knew how to improve. They created a new product, smoothies. Adding bits of fruit. Customers now had something that took a long time to eat, would keep them full and they could hold in one hand while driving. They had built a better product – better at accomplishing the customers’ JTBD.

As the concept of the JTBD was evolving n the late 1990’s, Tony Ulwick adopted it into his Outcome-Based Logic that was the basis of his system for defining customer metrics. That is, metrics of success. Tony had a huge breakthrough when he defined the JTBD as the unit of analysis (instead of products or customers, as was the norm). And from there, his “outcomes” became the criteria that customers used to define how well a JTBD was done. In so doing, Ulwick had transformed JTBD theory into something practical, something that could be used to define a customer’s metrics of success. He called the process “Outcome-Driven Innovation” which he outlined in his 2005 book “What Customers Want.”

Today, JTBD is a core framework within New Product Blueprinting and is described within the book "The Statue in the Stone: Decoding Customer Motivation with the 48 Laws of Jobs-to-be-Done."

JTBD helps to understand customer motivation. And therefore, has usefulness throughout a powerful innovation process such as New Product Blueprinting. It helps with every step from creating product strategies, to crafting interview questions, to writing specifications and even testing concepts. This framework is at the core of any VoC tool worth its salt. It's a philosophy that leaders and B2B product managers alike should understand.

For more on Jobs to be Done, check out this 2-minute video from our B2B Organic Growth Video series: 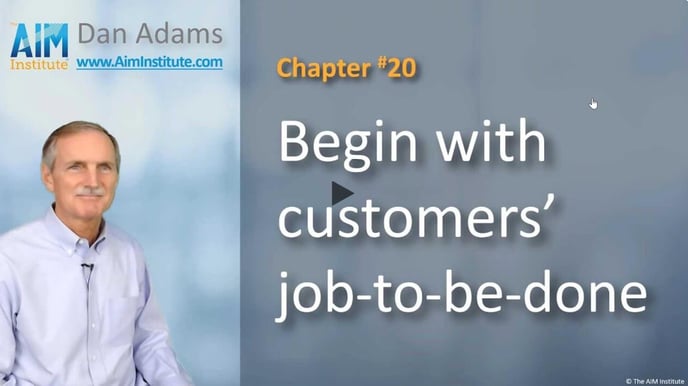