Multiple navigation and usability improvements were made; resulting in a better user experience:

1) There was an "X" in the upper right hand corner of every screen. This "X" closed the project. Users often selected this by accident, inadvertently closing the project. Since, there are other ways of closing the project, this "X" has been removed. However, it remains on the Discovery Noteboard and the Preference Noteboard as the means to close those screens. 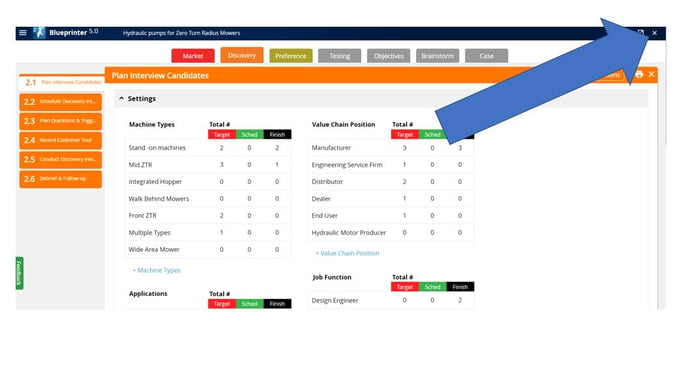 2) The menu icon, known as the "hamburger menu icon" has been removed from the Discovery Noteboard and Preference Noteboard. It is not needed on those screens, and this cleans up the appearance for those interviews.

3) The "Owner" and "Due" boxes have been removed from each tool. This project management functionality was rarely used in practice, and the boxes made it difficult for new users to open each tool.

4) Within the Prep Sheet, the icons to add Current State questions and Trigger maps were standardized to be like the other "add" icons throughout the program.